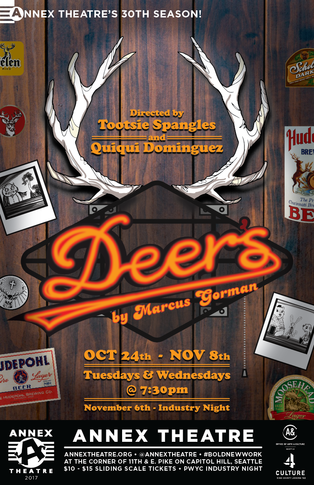 Antic animals drink away their troubles with friends and foes at a mountain tavern in the Cascades, where every bunny knows your name. Share a pint as these creatures encounter love, laughs, and their own primal natures. Beginning with the pilot and ending with a very special series finale, DEERS follows critters of all shapes and sizes over four episodes of this strange and unusual live sitcom.

"GO. SEE. DEERS. Great direction by Tootsie Spangles and Quiqui Dominguez, and a truly surprising script from Marcus Gorman. Do yourself a favor and see it."
– Clayton Weller, Pocket Theater

"Marcus Gorman's script is at turns wacky, touching, and heartbreaking, and the cast makes the most of it."
– Kara Brown, Ghost Light Theatricals

"This is the greatest play I've ever seen."
– Pilar O'Connell, Seattle Public Theater

"See this HILARIOUS, WEIRD, SWEET, GLORIOUS play! One of the most endearing and funny shows I've seen in quite some time." – Caitie Auld, Day Job

Available to read in full at New Play Exchange.