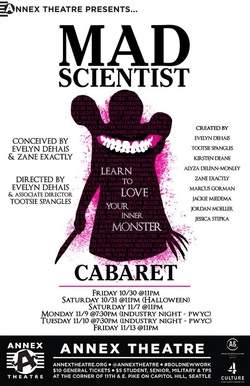 Seven nightmarish creatures escape from a laboratory and embark on a madcap adventure into the weird and wonderful world of Mad Science! Bound by their own bizarreness, they toil through titillating torments, physical feats, and extended experiments on each other as they seek to discover the truth to their own monstrosity... and humanity.

Through a special blend of comic mayhem and visual spectacle, they take the audience on a jam-packed journey into insanity that walks the line of horror and humor. Clowning, dance, puppetry, and more come together in this playfully audacious piece.

[text courtesy of Annex Theatre]
"Director DeHais and the cast have created a fully formed piece of theater that’s as thoughtful as it is funny. Initially, it seems like aggressive mischief is all these characters have to offer, but some segments smuggle in an unexpected dose of poignancy, like Alyza Delpan-Monley’s longing ballet routine, accompanied by transparent heart, lungs and arms puppets — just some of the meticulously designed props from Exactly [...] The show approaches the anarchic comic genius of Monty Python, exemplified by a hilarious bit that begins with some grotesque shadow play and ends with a proper tea party where one creature’s brain matter is on the menu." -- Dusty Somers, The Seattle Times

"Mad Scientist Cabaret was one of the most incredible performances I've ever witnessed. The perfect harmony of inspiration and improvisation coupled with a team of enthusiastic experimentative willing brilliant minds. The type of magic that can only happen in a true collaborative team... Congratulations on an amazingly executed surrealist joyride through the mind of a dissociatively disjointed myriad of malefacted minions. Top to bottom AMAZING PRODUCTION... You created fine art. The only thing that matters. I give you beyond five... but a universe of stars and an eternity of praise." -- Luke S. Walker

"Last Friday I saw Mad Scientist Cabaret at the Annex Theater on Capitol Hill. It was the funniest, most creative performance art that I have seen in a really long time. It is so refreshing to see a show so teeming and overflowing with intense artistic vision that I walked away inspired and excited to work on my own creative endeavors. I highly recommend going to see this while there is still time. I laughed so hard I cried. Twice." -- Denise Ure